It can be incredibly inconvenient when the shower curtain billows in while you shower. While there’s no way the shower curtain is attacking you, it can sure feel like it while you’re taking a relaxing hot or cold shower. What’s even worse is when the curtain blows in, and it sticks to your damp skin – that is always an unwelcome surprise.

If you have experienced this and are now thinking of getting rid of that shower curtain, you’re not alone. This happens with most, if not all, shower curtains.

But there’s no need to take drastic measures like throwing away your shower curtain. We’ve got some hacks and tips on how to keep the shower curtain from attacking you.

Why Does The Shower Curtain Blow In?

Before we discuss keeping the shower curtain from billowing, let’s find out what’s causing it first.

So, why does the shower curtain blow in?

While the first reason is only true for hot showers, you may still have been attacked by the shower curtain while taking a cold shower. This is because the strength of the shower stream can generate a pressure difference (regardless of the temperature of the water) which causes a change in air pressure resulting in a blowing shower curtain.

As the showerhead releases a stream of water, a gust of air comes along with it, causing the air pressure to drop surrounding the flow of water. This same drop allows the air outside of the shower to force its way in, whooshing the shower curtain inward.

Any swirling air inside the shower can also be a reason for the curtain blowing in and sticking to your skin while showering. This may be from different sources, like an open bathroom window or your bathroom fan.

How to Keep Your Shower Curtain From Blowing In

Whatever the cause of the shower curtain flying at you every time you take a shower, there are many simple ways to fix this problem.

Wet the Bottom of the Shower Curtain

Wet the bottom portion of the shower curtain with water, but make sure to do this before you take a shower.

The damp part of the shower curtain will be heavier when it is wet, so it will be harder for the cold air from outside the shower to blow the curtain inwards.

Part of the curtain, the dry part in the middle, will likely get blown in still, but it won’t reach you or stick to your skin while you are taking a shower anymore.

Use a Heavy Shower Curtain

If the difference in pressure between the air inside and outside the shower can easily blow the curtain inwards, the shower curtain you have is likely too thin and lightweight. Similar to wetting the bottom of the current to create weight, you can also fix the problem by simply buying a heavier shower curtain.

If you’re okay with getting a new shower curtain, go for one made with a heavier material. Another option is to use a dual-layer curtain, or two curtains hanging side by side. This will stop the airflow from each side, thus, preventing each of them from billowing.

If you don’t have a liner with your shower curtain, it might be a good time to think about getting one. A shower curtain-liner combo makes it harder for the airflow to blow the curtain inwards.

Similar to choosing a new shower curtain, however, you should pick a heavier curtain liner instead of a lightweight and inexpensive option. You can typically find shower curtain liners in various thicknesses from gauge-3 to gauge-10. Thicker and heavier versions are less likely to blow in while you’re in the shower.

Another way to keep the shower curtain from blowing in is to use curtain clips. You can find these in stores, in the same section you bought the curtain, or online.

Curtain clips are peel-and-stick clips that are attached to the wall in your shower.

Shower curtain clips usually serve as a way to reduce splashes when taking a shower, but clamping one side of your curtain can also prevent the curtain from blowing in or wrapping around your body. 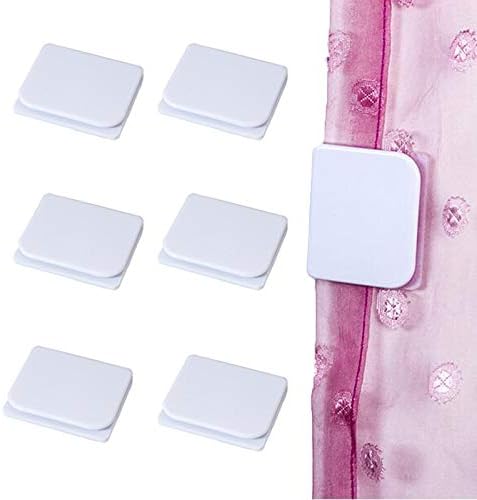 Buy Now on Amazon
We earn a commission if you make a purchase, at no additional cost to you.

If you don’t want to spend extra money on new curtain clips, perhaps you have suction cups and binder clips at home. These two items are also effective at keeping the shower curtain in place while you shower.

Attach a pair of suction cups to the wall on either side. Clip the binder clips to your shower curtain and use the wire lip to secure the curtain on the nubs of the suction cups whenever you take a shower.

If you want something reasonably aesthetic and are willing to spend a bit more money, you can also purchase curtain clips with suction cups and attach them to the wall to hold the shower curtain in place.

Hang Something from the Shower Curtain Rod

How to Weigh Down a Shower Curtain Liner

A great way to weigh down your shower curtains and prevent them from billowing is by using magnets. Place magnets near the bottom of the curtain, and they should hold each other in place, no sewing needed.

Buy Now on Amazon
We earn a commission if you make a purchase, at no additional cost to you.

If you don’t want to spend your money on curtain weights or if you can’t find one that works for your setup, washers will work as well. You probably already have them at home, and if not, you can easily and cheaply get them from home improvement centers and hardware stores.

A large washer or a couple of smaller washers looped together can be stitched on each side of the bottom part of the shower curtain to keep it from blowing in. It may not be the most aesthetically pleasing option, but you can always paint the washers to match your shower curtain, so they don’t stick out so much.

If you have fish sinkers, you can hand stitch a couple of them at the bottom of the shower curtain instead of the washers. Plus, they don’t rust and can add some interesting designs!

As a frequent contributor to top US magazines and publications in the home improvement niche, Mandy has been known for sharing her expertise on how to clean, organize, and decorate bathrooms.

Additionally, Mandy has immense experience offering lifestyle tips and tricks to her readers.

At Loo Academy, our mission is to offer trusted advice for everything related to bathrooms (design ideas, plumbing advice, showering & bathing tips, remodeling guides, and more) — a place where we all spend a great deal of time.

We work closely with qualified experts and follow a thorough editing and fact-checking process before publishing content.

Published content is regularly fact-checked and revised so that the information we provide is accurate and up-to-date.

The information contained in this website is provided for informational purposes only.

The inclusion of links from this site does not imply endorsement or support of any of the linked information, services, products, or providers.